I’m not one to join in with protests or picket lines. I don’t like to be in the public eye even when it’s an issue that I’m passionate about. I think often times when merely holding a sign or using a loud voice it doesn’t actually get the point across (at least not in the way you hope). This can get messy especially when it comes to social and moral issues that “Christians” get behind. Not that it’s wrong to fight against social injustices (I think we have to fight for those who can’t fight for themselves) but so often when done in the wrong way it actually detracts from who Jesus really is and what He’s about. I fear being lumped in with the “morally superior” crazies out there. Because let’s face it, we’re all screwed up in our own way. We’ve often found that it’s more helpful to talk about these issues face to face, across the table with people that we are already in relationship with. That’s our preference so that so much isn’t lost in translation. But, I also know that’s not always possible to ignite change.

Last week a situation arose in my own neighborhood, only blocks from my house, on a well traveled street. A book store that advertises itself as a family bookstore had put an obscene poster in the window advertising things such as bestiality, a rape room, Junior Miss Pageant, seventeen series, family nudists, and many more disgusting things with a gross picture on the front. In part of the store is an adult book/video store and has been for many years. I have my opinions about that as well but this poster in the window advertising things that are illegal (rape, underage children being exploited, etc) directly above a children’s book is beyond unacceptable. Some neighbors saw it, were disturbed and began contacting others to have something done about it. Our neighborhood association board members became involved, the news was called after the police refused to even check it out and the Mayors office referred them elsewhere. KGW moved quickly and since Matt is on the neighborhood association board and was working from home he agreed to do an interview. Little did we know that the interview would be on our front porch and we would both be asked to speak, on camera.

We both knew that this was beyond disgusting, something had to be done to remove at least the poster and let them know that we do not support the exploitation of women and children and don’t want this in our neighborhood. But did we want our faces to be the public figures saying so? Our kids and house would be on the news. Were we up for that? We decided that sometimes we don’t go looking for injustices to stand up for, they come to us and we can’t say no. We have to speak up and do what’s right to remove filth like that from our world, even if it’s only one block at a time. 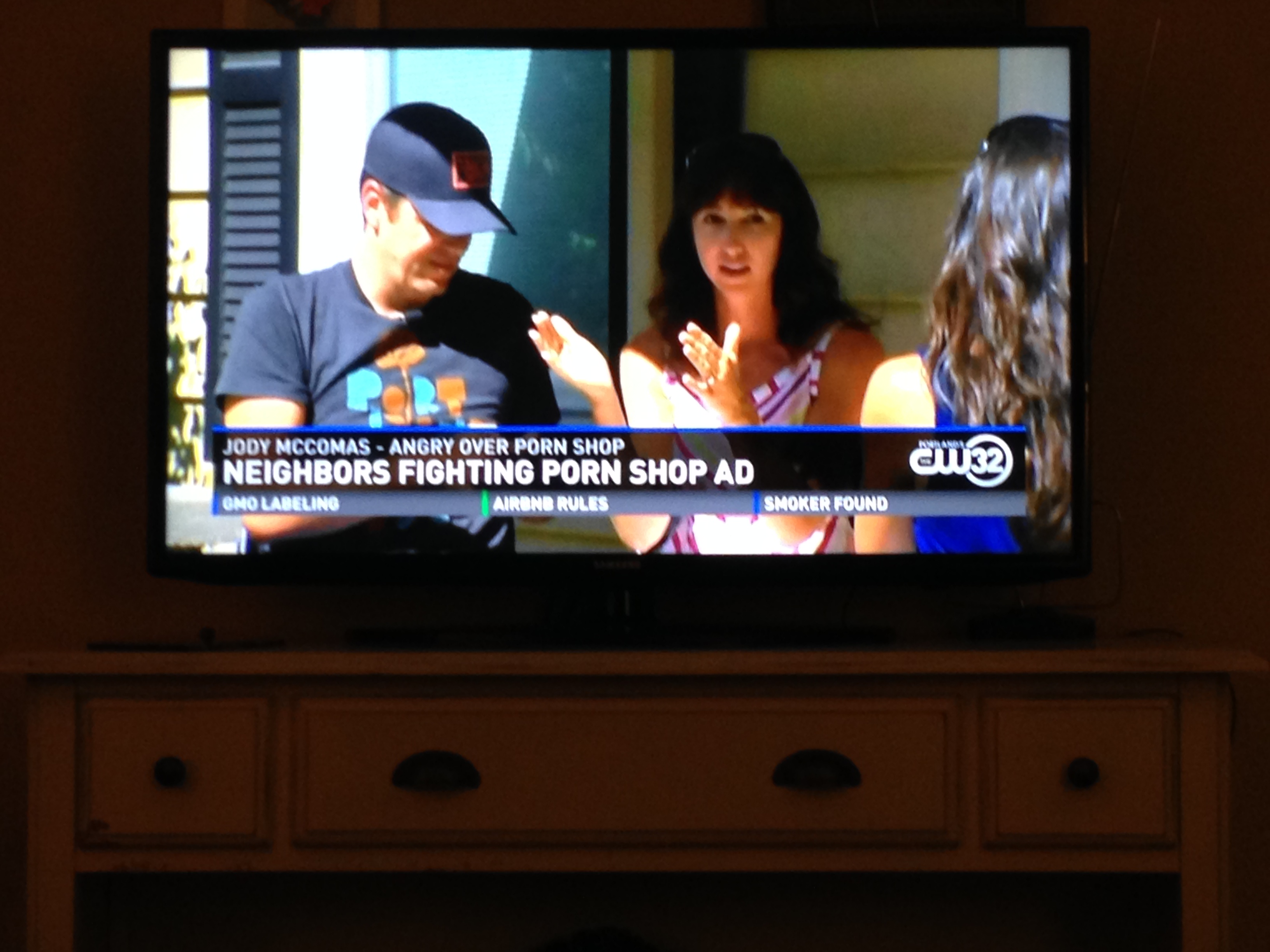 Our family ended up on the 10:00 news (and yes I took a picture while watching the news segment) and on their Facebook page. The comments regarding this story were overwhelmingly in favor of what our neighborhood stood up for and why we were trying to get the poster removed and possibly have him evicted for his disgusting business practices. But there are always the handful of people who justify the evil out there, make ridiculous comments like “The hipster parents should just move to the suburbs so they don’t see it.” As if this doesn’t happen in the suburbs and that I wouldn’t care about it there. And for the record, I look nothing like a hipster. So there’s that. Or the comment from the owner and a mom who commented, “I never shielded my kids from the world. You have to explain it to them sometime.” I’m sorry but no child should ever have to know what some of those topics are at 4, 14, or 40 for that matter. It’s eye opening to see that people support this industry, justify it, and rationalize away the fact that others are being exploited for the “preference of entertainment” of another human being. Those people in the videos that he sells in the store for $5 is someone’s mom, sister, daughter, brother, father, or son.

Yes, many of my convictions come from my belief in Jesus. But you don’t have to follow those same beliefs to know that this kind of stuff is totally unacceptable. I’m so thankful for those in my neighborhood who saw this, were outraged, took action, and that the news covered this story. As a result, the poster was taken down and he may still be evicted. I know that his business is still there, mere feet from rows of children’s books but our kids won’t have to walk by the graphic images in the window.

“Learn to do right, seek justice, defend the oppressed.” Isaiah 1:17

“Let each of you look not only to his own interests, but also look out for the interest of others.” Phil. 2:4