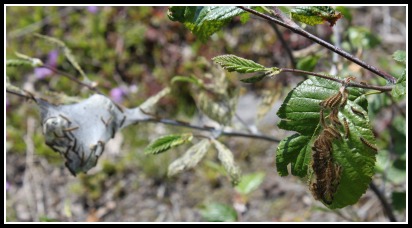 My mom had warned me that on the news they had a story about the caterpillars at Mt. St. Helens and how they were taking over. I took the warning and thought to myself, “How bad can they really be?” We had been wanting to take the kids and go for the past year so we decided Sunday would be a great day to do it. We wanted to try and escape the heat and head to higher ground (which didn’t happen, it was 91 there) and see some historic beauty.

On the drive there I was taking in the views, thinking about my grandpa (papa as we called him) because he helped build the road to the observatory and listened to the kids giggle with the wind in their faces from the back seat. All the while I kept wondering why the trees were covered in weird web looking things and had no leaves.

When we got the observatory a nice park ranger told us that the caterpillars were plentiful and we would surely see some on our hike. She also told us if you make a whooping sound they would dance for you. To Jenna’s delight they most certainly did dance about when you whoop for them. That gave us hours of entertainment.

Okay friends, we didn’t just see the caterpillars, we could hear them moving everywhere (that’s what had overtaken the trees with web like things), dropping from the trees, crawling up our legs occasionally and crunching under our feet. It took a lot of bravery for me to suck it up and hike anyway because I didn’t want to instill a crazy fear of caterpillars in my daughter. She was a champ. We hiked in the heat of the day, took in the views, whooped it up for the caterpillars and even brought a couple home for Jenna to have as pets. See how brave we were.

Isaac’s favorite thing to do was pick them up, toss it to the ground, then step on it and say “Oh No!” Yes son, oh no. Boys and girls couldn’t be more different could they?

For an entertaining short story on our hike and a great video of some dancing caterpillars head over to Jenna’s blog.

All of the yellow on the ground on the path above are caterpillars. Millions of caterpillars!