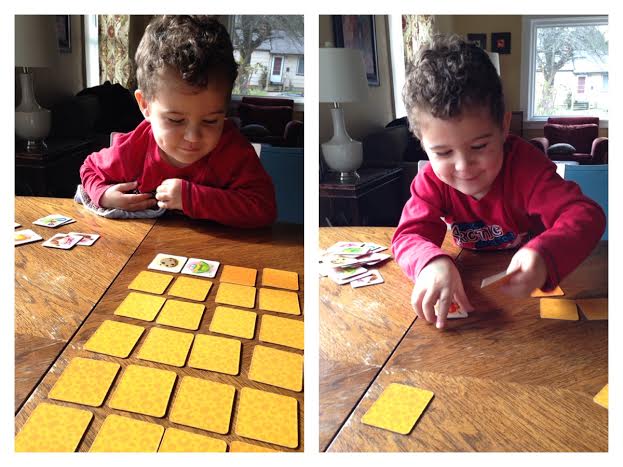 Today I played several games of Memory with my 3 year old and a couple games of Candy Land with my 3 and 7 year old. And when I say I played, I got schooled, by my 3 year old, multiple times I might add. It was rather frightening that the child that has the attention span the length of a caterpillar has a better memory than I do. I have Alzheimer’s in my family so I’m thinking I may need to start worrying or at least try and get more sleep, drink more coffee to get the wheels turning and maybe start doing some brain buster games to amp up the brain power. Yikes.

I would like to say however, I took all that losing like a champ. I was a fantastic sport, not because it comes naturally for me. As you may recall from my last blog post I once called my husband a naughty name while being a little too competitive and probably had lost a game. I come from a home where my parent, who shall remain nameless is somewhat of a sore loser and passed on those genetics to me. Our kids are going to see poor sportsmanship displayed everywhere. It’s even in Disney movies that should be teaching good things (wishful thinking) and instead call each other losers to which my son has since repeated dozens of times. And even though our world will influence our children left and right both for better and for worse I want to teach my kids that in our house we lose like champions. We win and lose with respect. At some point we all lose and if we don’t then maybe we aren’t taking enough risks. We want to lose with grace and win with humility. This doesn’t mean we can’t celebrate winning, we just want to do it with class. We high five one another and say “great game” and enjoy the journey even if it means getting schooled by a 3 year old. We can be each others cheerleaders along the way, celebrating with those who take home the victory and weeping with those who crumple in defeat. If we don’t learn it now while playing Candy Land it just gets harder when the stakes get higher and the battle is more important.

As a parent I want my kids to learn those skills because they will carry these lessons on with them for a lifetime of highs and lows, wins and losses. I desperately want them to be people of character, who love God and love others and have the ability to lose with grace and win with humility. I’m still working on these things myself, some of us are slow learners (and have the fiery spirit of a red head). Maybe by the time my kids grow up I will too (After all I still haven’t learned to rejoice when the Oregon Ducks win and don’t see that happening anytime soon).

What about you, is it hard for you to lose? Is this something you teach in your home?